What can we see in Badajoz?

It is considered one of the three most important in the Iberian Peninsula. It was declared a Historic-Artistic Monument in 1931.

It was built in the year 875 by Abd-al-Ramman Ibn Marwan “The Yilliqui”. Next to her, the first city of Badajoz, of which it has news, was known as Batalyaws. The current fortress corresponds to the reforms carried out during the Almohad period in the 12th century. Located on the hill of La Muela, on the left bank of the Guadiana River, it dominated the entire city of Badajoz, which came to have several mosques, public baths, markets … In its interior, luxurious Arabian palaces were built. Renaissance style, like that of the Dukes of Feria, or as a good example of a noble-fortified residence, that of the Counts of La Roca, with a beautiful Mudejar cloister, which currently houses the Provincial Archaeological Museum.

He enjoyed his time as mayor splendor in the 11th century, during the Aftásida dynasty, which founded the Taifa Kingdom of Badajoz. During these years, the Arab kingdom of Badajoz became one of the most important, extensive and influential of the Iberian Peninsula. The arts and sciences were also cultivated, with the largest Arabic encyclopedia in Spain being written here. 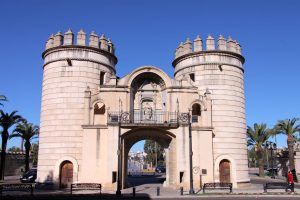 Both monuments are situated together. Its construction began in the year 1460 and its name is due to the palm trees that have traditionally accompanied them.Puerta de Palmas is one of the most emblematic monuments of the city. It supposed the entrance door to the walled enclosure of the city, leaving from it the way to Portugal and obligatory passage of the Royal Procession that went towards one or the other country.

In the outer arch has a stone arch, on which sits the great imperial shield of Charles V, which has two medallions with busts belonging to members of the royal family (almost in all likelihood, the Emperor Charles V and his woman Isabel of Portugal). It also has an inscription in the upper part that is dedicated to Felipe II that was made in the year 1551.In the inner part it contains a chapel with the image of the VIRGEN DE LOS ANGELES.The Puente de Palmas served as a natural means of communication between the Spanish and Portuguese royal courts. It has a total length of 585 meters.

It presents magnificent views of the citadel of the city and the river Guadiana.Both the Puerta and the Puente de Palmas are among the most important in their category in Extremadura. 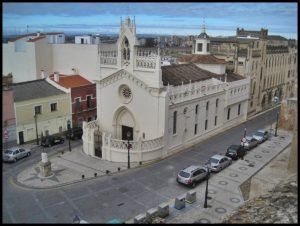 On the old Arab square, in the seventeenth century, Bishop Marín de Rodezno designed a broad reform that led to the Plaza Alta to its current structure of arcades and arcades in almost all its perimeter. It has a Renaissance character with wide open spaces and Baroque decoration, although you can also see reused Visigothic remains, such as capitals, shafts … The town hall of the city was placed there until the end of the 18th century. Las Casas Coloradas, recently restored, dominate the plaza.

On the eastern side it communicates with the Tower of Espantaperros or the Atalaya, with La Galera and the gardens of the old Archaeological Museum. On the north side, it is connected through the Arco del Peso, with the Plaza de San José, smaller than the previous one but with greater antiquity, with Mudejar houses, also with arcades, some of them dating from the 15th century. Next to the Arco del Peso is the Puerta del Capitel of the Arab citadel.

In one of the sides of the Plaza Alta is located the building of the Consistorial Houses, in which the town hall was located. It is located between an albarrana tower and the Abarlongada Tower. It dates approximately from the year 1500, it is of Mudejar style and it has in its interior four heraldic shields, all royal shields. Two of them belong to the Catholic Monarchs. 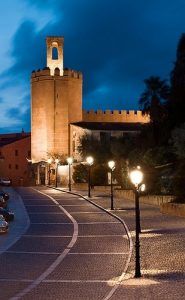 Popularly known as this, it was originally called Torre de la Atalaya, and is one of the most representative monuments of the city.

Almohad style, was built in 1170, presents an octagonal floor and is crowned by a quadrangular body, served as a model for the construction of the Torre del Oro in Seville, which is dated later. It reaches 30 meters in height and served in its time for the surveillance and domination of the suburb of La Galera, which currently houses magnificent gardens. 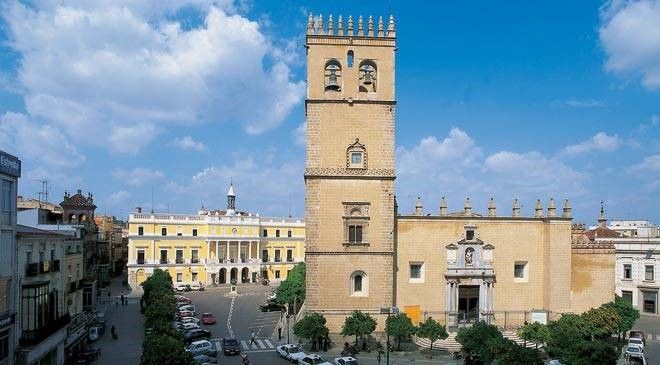 Plaza de España is one of the busiest centers in the city. In it the Municipal Palace is located, in which its located the city council, that is a work of half-full of century XIX in which an eclecticism own of the architecture of Badajoz is shown during that century.

Opposite the facade of the Municipal Palace is the Luis de Morales statue, a renowned 16th-century Spanish painter. You can see some of his works in the Bellas Artes Museum and the Catedralicio Museum. Presiding over the square we have the San Juan Bautista Metropolitan Cathedral. It was built on an old Visigothic church between the 13th and 16th centuries.

In the same square or in its surroundings we also find other places of interest such as, Casa Álvarez-Buiza, Casa del Cordón (Badajoz Bishopric) or the Municipal Archive, among others.

Museums you can visit:

Parks and gardens you can visit:

Bastions you can visit:

Churches and Convents you can visit:

Squares and Buildings you can visit:

This website uses cookies to improve your experience while you navigate through the website. Out of these, the cookies that are categorized as necessary are stored on your browser as they are essential for the working of basic functionalities of the website. We also use third-party cookies that help us analyze and understand how you use this website. These cookies will be stored in your browser only with your consent. You also have the option to opt-out of these cookies. But opting out of some of these cookies may affect your browsing experience.
Necessary Always Enabled
Necessary cookies are absolutely essential for the website to function properly. This category only includes cookies that ensures basic functionalities and security features of the website. These cookies do not store any personal information.
Non-necessary
Any cookies that may not be particularly necessary for the website to function and is used specifically to collect user personal data via analytics, ads, other embedded contents are termed as non-necessary cookies. It is mandatory to procure user consent prior to running these cookies on your website.
SAVE & ACCEPT